I often struggle with sharing my faith with people.  I try to convince myself that if I just act right, I can set an example for others, and they might see something different about me.  There are a couple of problems with that.  First, I don't act right that much, so people don't see anything different about me.  Second, there are a lot of good people who don't believe, so even if I do get my act together and act right, I might not look that different.  So trying to act right isn't enough.  I have to be more intentional.  The first step is relationship.  I need to understand and care about someone else so that they might want to listen.  The second step is to speak from personal experience, not the Bible.  What the Bible says is not important to someone that doesn't believe it is truth.  Making the opportunity to tell someone what Jesus has done in my life is the best way forward.  I want to do that more.   This song does a nice job driving that point home.
Posted by Tom Miller - Getting Deeper with Tom at 6:52 AM No comments:

All of us have had those moments when something slips out of our mouths unexpectedly, and we think, "wow, where did that come from?"  We can easily write it off as a lapse in judgement or just bad digestion.  In Andy Stanley's book, Enemies of the Heart, Andy explains that those unexpected outbursts shouldn't be so unexpected.  Those outbursts are almost always the product of our true heart.  The rest of the time, we are just covering them up or subduing them.  The worst part of it is, the outbursts are usually directed at those that are closest to us - our spouses, kids or closest friends.  Last night, our group spent time talking about why that is.  The truth is that those that are closest to us are the ones who have the power to hurt us the most.  If I had to name one word as the cause, it would be selfishness.  For some reason, we want to put our needs above those of others.  I believe a piece of it could be a survival instinct that is a part of all animals, but that can't be all of it.  Our arguments aren't usually life or death situations.  I don't know the answer as to why we are this way.  I do know, however, that God wants our hearts to be transformed to His, and I want to take a small step in that direction today.

Posted by Tom Miller - Getting Deeper with Tom at 5:32 AM No comments:

Last night our small group from church met for the first time this fall.  We have a great group with 15 members this season. We are reading Andy Stanley's book, Enemies of the Heart.  Andy introduced the book by talking about a scare he had when his heart was having an unusual beat pattern.  He went to the hospital and after running a lot of tests, they finally figured out the irregular beat was caused by a steroid shot he had received to treat a reaction to poison ivy.  Of course, the book is focused on our emotional/spiritual heart, not our physical heart, but there are some interesting similarities. Many times people are prescribed medications to treat symptoms caused by heart problems, without treating the underlying problem. We do this with our spiritual hearts as well.  There are outside forces from the world that put pressure on us.  We often build walls to protect ourselves from those pressures, but eventually the underlying problems can surface or even explode - an attack of the heart. We will be spending the next 12 weeks looking at those enemies of the heart and learning how to understand them and guard against them.  Stay tuned.
Posted by Tom Miller - Getting Deeper with Tom at 5:27 AM No comments: 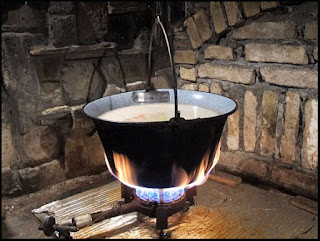 How many times have you heard, "that was a great movie, but it was nowhere near as good as the book"?  It seems like this is almost always true.  The level of detail that an author can add describing the character's thoughts and feelings can be impossible to recreate in a 2 hour movie.  Streaming services have made things a little easier with multi-part series giving the producers more screen time to develop characters and the story.  Amazon Prime has just released The Rings of Power based on the writings of J.R.R. Tolkien.  It takes place thousands of years before the epic Lord of the Rings movies.  Many critics are skeptical that anyone can come close to capturing the artistry that Tokien displays in his writing.  There is no question the series will fall short of that.  But that is not a reason for complaining.  Pete Peterson, in his article, Forge the Ring, describes the producers of the series as sub-creators.  Tolkien was the creator of the story, and the producers will take that story and make something different.  It won't be exactly like the original story, and probably won't be as good, but it should have much of the same flavor - kind of like making a stew.  Even though you use a lot of the same ingredients, it will come out somewhat different each time.  The idea of "sub-creator" also applies to each one of us.  God is the Creator.  We are each sub-creators trying to build his kingdom on Earth.  We will never get close, but it sure can be fun trying.  Make your story great today.
Posted by Tom Miller - Getting Deeper with Tom at 7:37 AM No comments: 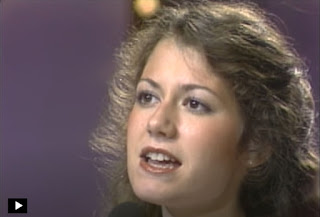 My first memory of contemporary Christian music was Amy Grant singing My Father's Eyes when I was in high school in the late 70's.  My church was still using the hymnbook and the pipe organ (which I loved, and still love).  It wasn't until I was married with young kids in the 1980's that our church offered a contemporary service "with electric guitars".  I remember the older members questioning how a person could worship Jesus with guitars.   I like contemporary Christian music, too.   I watched the Hulu special, The Jesus Music, this week.  I found it fascinating that the Jesus music movement was started by a bunch of hippies in California that were underwhelmed by a life that was centered on sex, drugs and rock and roll.    One hippie, Larry Norman, got introduced to Jesus and is credited with releasing "Upon This Rock", the first full Christian music album, in 1969.  (Listen here)  Many high-profile televangelists labeled the music "of the devil"  at that time.  I wonder what they would say today if they visited almost any of the most successful urban churches.
Posted by Tom Miller - Getting Deeper with Tom at 6:31 AM No comments: 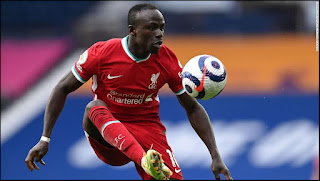 I have never played soccer.  There was only one type of football in Columbus, GA where I grew up, and it wasn't the soccer one.    But my interest is piqued now that all my grandchildren that are old enough (5 so far) are playing.  At first, attending games was all about moral support, as we watched 10 kids hover around a ball like dust hovers around Pig-Pen.  But now, things are different.  The older grandchildren are excelling, and their talent and endurance is literally amazing.  The older boys, as well as my son and son-in-law, are also avid professional soccer fans.  I can't keep up with all the different professional leagues and players, but I, along with other non-ballers, got introduced to Sadio Mane (then playing for Liverpool) when one of his social media posts went viral.   A photo of him included his iphone with a cracked screen, and many commented: "this guy earns $10M euros/year.  Can't he afford a new iphone."  His response was inspiring: "Why would I want ten Ferraris, 20 diamond watches and two jet planes? What would that do for the world? I starved, I worked in the fields, I played barefoot, and I didn't go to school. Now I can help people. I prefer to build schools and give poor people food or clothing. I have built schools [and] a stadium; we provide clothes, shoes, and food for people in extreme poverty. In addition, I give 70 euros per month to all people from a very poor Senegalese region in order to contribute to their family economy. I do not need to display luxury cars, luxury homes, trips, and even planes. I prefer that my people receive a little of what life has given me".
Sadio's father died when he was young because there was no medical facility nearby.  After making a name for himself in professional soccer, Sadio knew his town still needed a hospital, so he built one there.  Sadio is a role model for professional athletes and for each one of us.  For more on his story, click here.  And to see his brand of poetry in motion, click here.
(Thanks to my good friend, Janet Jeanes, for reminding me about this great story.)
Posted by Tom Miller - Getting Deeper with Tom at 7:45 AM No comments: 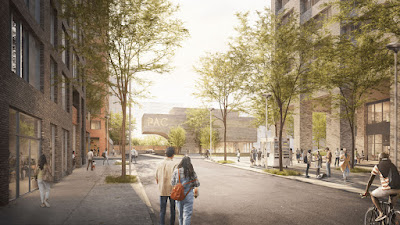 What would a developer do with 10.5 acres in Brooklyn, NY?  I guess that depends on what they are developing.  If they are developing wealth, it would likely be luxury apartments or a commercial office building.  If they are developing God's kingdom on earth, it might be something different.  A.R. Bernard is the pastor of the largest church in New York City.  He started the church in a grocery store, and the church has acquired some of the property around it.  For the past 10 years, Bernard has been planning a $1.2 billion urban center that includes affordable housing, a trade school, a performing arts center, a supermarket, and of course, a place for his 32,000 members to worship.  Bernard is hoping to have final approval this year with the ground breaking in 2023.  Praise God for a leader with the vision to build God's kingdom on Earth.  To learn more about this inspirational project, click here.
Posted by Tom Miller - Getting Deeper with Tom at 10:18 AM No comments: