Where is your lion? 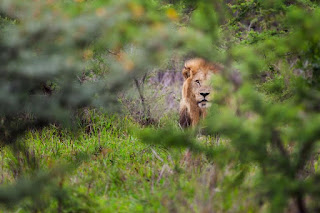 Our ConnectGroup from church just finished up Mark Batterson's "In a Pit with a Lion on a Snowy Day".  The book helped generate a lot of good discussion, and I have to say, we all didn't agree with the author all the time.  He closed out the book with this line of  thinking.  God has something big in store for all of us.  We may know exactly what that is, and just be scared to pursue it, because it seems too big.  It will be too big for us, but it won't be too big for God.  Chase that lion into the pit and slay it.   God doesn't guarantee that everything will work out every time just like we think it will, but it does work out according to His plan.  A failure could teach us what God wanted us to learn.
But what if we just don't have any idea what lion we are supposed to be chasing?  If you don't know what it is, it probably isn't because you need more knowledge or more training, it's probably because you need to know Him more.  I challenge you to pray three times per day that God will reveal His plans for you.  Use your watch or your phone to set a reminder if you need to.  You might be surprised by what you hear when you take a minute to listen.
Posted by Tom Miller - Getting Deeper with Tom at 1:04 PM No comments: 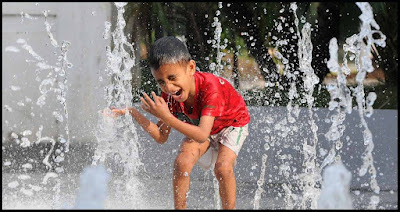 I learned a new word this week: neoteny.  Neoteny is the retention of juvenile features in the adult animal.  While the word is typically usually used to describe characteristics of non-human animals, it applies to us as well. Gaining maturity is typically viewed as a positive, natural part of getting older, and in a lot of ways, it is.  But then there is that verse in the Bible: "Unless we change and become like little children, you will never enter the kingdom of heaven."  Last night, our group talked about how to do that.  Here are some of our ideas:  Play more.  Laugh more.  Learn more.  Trust more.  Love more.   I think most of us could use a little more neoteny in our lives, and I know God will smile down on us if we do.

Posted by Tom Miller - Getting Deeper with Tom at 5:58 AM No comments:

At the age of 16, Pat was abducted from his family and taken to another country where he was held captive and enslaved.   After six years, he escaped, traveling 200 miles by foot to a port city where he made passage back to his home country by boat.  Pat had been introduced to Christianity early in his life and while he was enslaved, he used the time to deepen his relationship with Jesus.  After returning home, he continued his religious studies and felt a call back to the country where he had been a slave to tell others about Jesus.   He became widely known as the most effective evangelist of his time in that country.   Upon his death, a celebration of his accomplishments was initiated which ended up being an annual event celebrated around the world.   Occurring during the Christian observance of Lent, the day became known as a day when any abstentions from food or drink were paused so that full celebrations could take place.  That day has been known ever since as St. Patrick's Day.  I hope you celebrate well!

Posted by Tom Miller - Getting Deeper with Tom at 11:03 AM No comments:

6 year old, Pavel Averbukh, was fortunate to escape the port city of Odessa, Ukraine before 5000 civilians, including most of his family and friends, were slaughtered by the ruthless militia invading from the north.  The year was 1941, and the invading soldiers were German, not Russian.  Pavel is now 86 and lives in the Brooklyn neighborhood known as Little Odessa.   Little Odessa has the highest concentration of Russian immigrants in the western hemisphere.   I have been reading a WW II book entitled, "A Higher Call", which was recommended to me by a close friend.  The book has made it painfully obvious how little I know, or how much I have forgotten, about World War II.   I found a docu-series on Netflix that helped me quickly fill in some of the empty spaces.   It has been fascinating (and terrifying) to see the similarities between what was happening in the 1940's and what is happening now in the exact same area of the world.   I know that all of us are being inconvenienced right now by the increased fuel prices resulting from what is happening overseas.   I don't like it either.   But I think it would do us all some good to think about those who have been forced from their homes into shelters and the streets, separated from family, and even killed over the past several weeks.  Their inconvenience seems somewhat higher.

Posted by Tom Miller - Getting Deeper with Tom at 7:45 AM No comments:

Chapter 5 in "In a Pit with a Lion on a Snowy Day" is about guaranteed uncertainty.   Some people think faith in God is about knowing exactly what He is going to do.  Last night our group talked about things that we never expected to happen which turned into some of the most vivid memories from our lifetime.  We talked about sad surprises like the death of a loved one or the sudden termination from a job.  And then there are happy surprises like the conception of a child when the doctors said it wouldn't be possible.  The thing that we should have faith in is not faith that we know exactly what God is going to do, but having faith in the fact that His plan is perfect.  We may not understand that perfect plan, but God's desire is that we seek to know Him more.  As we do that, His plan will be revealed to us, but not completely.  He is way too big.  But if we trust in Him, and in his Son, we will meet Him one day, and the full plan that He has for us will be revealed.  That is His promise.  I am certain of that.

Posted by Tom Miller - Getting Deeper with Tom at 6:38 AM No comments: