Just thinking back on the year, I first remember it being the year of my first granddaughter – and my second granddaughter - definitely the highlights of my year.  I remember my church launching a new campus and getting to be a part of the serve team there.  I remember helping Dan lead our small group studying the Divine Conspiracy.  I remember playing in the Georgia Wind Symphony under the direction of my good friend, David Gregory.  I remember three fun trips to the beach – one with Caroline’s family, one with my family and one with good friends.   I remember fun with family and friends at the lake.   I remember having the privilege of working with Janet and Michael helping others find their own spot on the lake.  I can’t wait to see what 2016 brings.
Posted by Tom Miller - Getting Deeper with Tom at 4:29 AM No comments:

Innocence of a baby

The Christmas season comes to me burdened with the pressures of finishing the year strong, shopping, Christmas cards and entertaining.  My church has helped me to remember that this season is about the innocence of a baby – a baby born to a scared mom who felt the weight of the world on her shoulders.  The innocence of that baby has been made real to me this year by the recent births of Caroline and Nora to my children.  To hold those babies close and look into their eyes, I am amazed at the miracle of their creation and reminded of the miracle of their Creator.   I hope that your experience more of the joy of Jesus this week.
Posted by Tom Miller - Getting Deeper with Tom at 5:04 AM No comments: 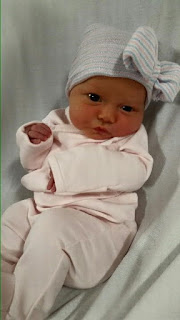 This season is all about celebrating the birth of the baby, Jesus.  Our family has been blessed with another reason to celebrate.  Nora Catherine was born to my son, Michael, and daughter-in-law, Emily last week.   This is their third child and their first girl.  There is nothing like holding a newborn baby and being totally overwhelmed by the wonder of the event.  At the same time, I am convicted of the responsibility we all have to make sure that she has everything she needs to grow into the person that God has intended her to be.   I will be praying that we make Jesus known to her so that one day she will trust Him as her Savior.
Posted by Tom Miller - Getting Deeper with Tom at 6:47 AM No comments:

I try to be true to not repeating myself in this blog, but I felt the need to connect the dots today.    Last year, before Christmas, I posted this entry with a link to one of my favorite pieces of music, O Magnum Mysterium, sung by the Kings College Choir in Cambridge, England.     “O Magnun Mysterium”  is Latin for “the great mystery” written about the birth of Jesus.    In February, I wrote about my dear friend, David Gregory.  David was my high school band director and predicted that one day, Caroline and I would be married.   On this coming Saturday, under the direction of David Gregory, Caroline and I, now married, will perform O Magnum Mysterium under the direction of David Gregory at Cambridge High School,  all connected by the black dots on a piece of paper - and everything in between.
Posted by Tom Miller - Getting Deeper with Tom at 5:26 AM No comments:

My Kind of Coach

I don’t have much to add to everything that has been written about Mark Richt leaving UGA.  There are people who know a lot more about football than me, and there are people who know him much more than I do.  So I won’t repeat everything that has been said, but I do have two personal memories that I want to share.  The first time I met Mark in person was when he came to our church to speak.  I can’t remember the year, but it must have been very early in his  tenure at UGA.  He spoke on a Sunday evening and the sanctuary was full.  He shared his stories of football and his faith – very well done as you might expect.  Afterwards, our minister mentioned that Mark was going to need to leave quickly after the service to be with his family.   I’m sure that some who had hoped to shake his hand were disappointed.   On Monday morning, the church office got a call from Mark’s office saying that he had felt bad that he had left quickly the night before and wanted to know if he could come back to meet people and sign autographs.  He stayed true to his commitment and came back on a Wednesday evening to the delight of many members.  The other story I have is through my daughter-in-law.  She worked as a trainer with the UGA football team while Mark was coaching there.   In a regular review meeting with him, Mark’s question to her was “are they guys treating you with respect?”   I appreciate Mark for looking out for my daughter-in-law.  I am a fan for life.
Posted by Tom Miller - Getting Deeper with Tom at 6:19 AM No comments: