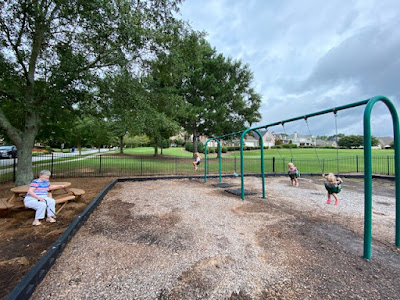 Work has been quite busy for the SpotOnTheLake team over the past three months.  Apparently, there are a lot of people who have been cooped up inside that are looking for a weekend getaway place.   It has been somewhat of a challenge to balance work with family, but this morning, I had a fun break.  While the moms took care of a little shopping, I got some time with three of my granddaughters and my mom at the play park.  This is what makes all the work worthwhile.  I hope you can make time this week for the people that are most important to you.
Posted by Tom Miller - Getting Deeper with Tom at 9:49 AM No comments:

Jeff Shinabarger is an author, speaker and social entrepreneur that lives in Atlanta with his wife, Andre' and their two children.  I came across his TedX talk from several years ago when I was doing some research on generosity.  Jeff does a good job talking about how in order for one person to give, there has to be someone to receive.  Many have gotten better about giving, but how good are we at receiving?  By looking for ways to receive, we acknowledge that we don't have it all together, creating humility in ourselves.  At the same time, we are becoming an outlet for someone else's generosity.   Take 10 minutes to listen to Jeff's talk and think about ways that you can receive generously.

Posted by Tom Miller - Getting Deeper with Tom at 6:14 AM No comments:

I wasn't much of a country music fan when I was young.  One of my first memories of enjoying country music was in 1988.  I was at an IBM event with Caroline, and Dolly Parton was the entertainment one evening.  I liked her music, but I loved her.  She was so down to earth - and so likeable.  Many years later, I watched Carrie Underwood win American Idol and was impressed by how she handled her new-found fame.  Later she sang, along with Vince Gill, one of the most memorable versions of How Great Thou Art that I have ever heard.  This year, I noticed that Zach Williams was nominated as the Dove Award's Artist of the Year.  I didn't know a lot about him, but was delighted to find this duet with Dolly Parton, connecting several decades of memories for me.  Some celebrities take a lot of heat for only looking out for themselves.  It's great to see these country artists looking out for something else.

Posted by Tom Miller - Getting Deeper with Tom at 7:37 AM No comments:

Lions or Tigers or Bears

King Darius needed some help managing his kingdom.  He appointed three administrators to assist him.  One of those administrators, Daniel, showed a lot of promise.   So much promise, that King Darius wanted to set Daniel over the whole kingdom.  The other administrators were envious and worked to find some dirt on Daniel that would subvert the king's plans.  Finding none, they suggested that the king issue a decree that anyone who prayed to a god or person other than the king would be thrown into the lion's den.  Hearing this, Daniel went to his room and prayed to the God of Israel, as he had always done before.  When he was found out, the king announced that per the decree, Daniel would be thrown into the lion's den, but he told Daniel, "may the God that you serve continually rescue you."   The next morning the king ran to the den to see if Daniel was alright.  Daniel emerged unharmed.  The men who had falsely accused Daniel were thrown into the lion's den with their families, and all were slaughtered.  The king then issued a new decree:  "May you prosper greatly.  You must fear and have reverence for the God of Daniel, for he is the living God and endures forever."

Posted by Tom Miller - Getting Deeper with Tom at 4:37 AM No comments: