It's that time of the year again to think about New Year's resolutions.   In trying to create opportunities for a little more follow through this year, I came across a good article.  It talks about the four things I can do to position myself for success.  1) Be sensible and be sure to consider all of the ramifications of the new resolution including impacts on your family and friends.  2)  While I may state what "I am going to do", I must realize that anything accomplished is only with God's help.  I am in complete dependence on him.  3) I must make my resolutions humbly and not expect that since "I" have accomplished something, that God will reign down connected or disconnected blessings on me, and 4) any praise received from success achieved must be redirected completely to God, as He is the author and facilitator of all good things.  In checking the source for the article, it gave me hope that the author of these thoughts was Jonathon Edwards, who lived from 1703 to 1758.  That's what I call staying power, and I would love to have a stiff dose of that.
Posted by Tom Miller - Getting Deeper with Tom at 8:02 AM No comments: 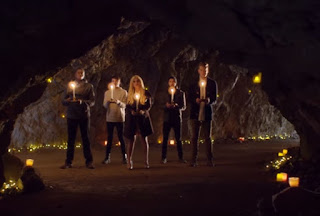 My wife, Caroline, did a great job this year planning and executing our family Christmas card.  We had some great photos of the whole family from our trip to Disney World this year which she was able to use.  I have sent business Christmas cards in the past, but didn't get one out this year.  In thinking of a greeting that expresses my joy at this time of the year, I thought of the song "Mary did you know?" and this arrangement by Pentatonix.  I hope you can make time to watch and listen.
Posted by Tom Miller - Getting Deeper with Tom at 7:02 AM No comments:

This week, I had a little excitement of the wrong kind.  I was walking a lake lot with a contractor on Tuesday.  You may remember that it was quite windy on Tuesday in our area - windy enough to blow a large limb out of a tree that happened to land directly on my head. It rung my bell, and my head was bleeding.  I couldn't tell how bad it was, but I felt ok to drive myself to the hospital.   I left the hospital the proud owner of 9 new staples in my head.  Tuesday night, I was watching the local news, and there was a story of a mother who had been hit by a limb that had fallen due to the weight of the snow.  She is alive but paralyzed.  Fear, relief and sadness all hit me simultaneously.  "Why did that limb hit me?"  "Why was the limb that hit her bigger than the one that hit me?"  "How is her family going to cope with her new condition?"  "What if I had been paralyzed?"  I don't have the answers.  I just pray that she knows the same God that I do - the One that is powerful and loving, and that the people around her are able to show her their love and His.
Posted by Tom Miller - Getting Deeper with Tom at 4:56 AM No comments:

Mklola Leontovych was a Ukrainian composer born in 1877.  His was descended from a line of village priests and studied at a theological seminary that both his father and grandfather attended.  His first position was as a music and math teacher and shortly thereafter began arranging simple a cappella arrangements for his choirs.  With a life long commitment to music and composing, his most famous work, "Shchedryk" was written at the age of 39.  Mklola may have been shocked to know that his simple composition would be arranged 1000's of times and performed millions of times in the century to follow. If fact, this recent arrangement has been viewed over 100,000,000 times already at youtube.

Posted by Tom Miller - Getting Deeper with Tom at 6:51 PM No comments: