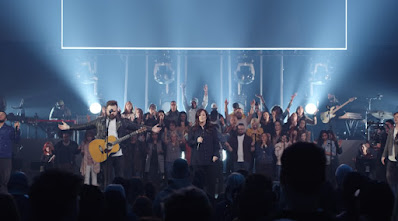 Caroline and I are excited for a quick getaway to Greenville this weekend.   Greenville has a vibrant downtown area that we love to visit.  We plan to ride bikes on one of the many paved trails and eat some good food.  But this weekend was selected because Kari Jobe and Elevation Worship are leading worship Saturday night at an outdoor venue in Simpsonville.  I have posted music from Kari before.   This tour is called The Blessing Tour, and here is a link to her performing the title song.  I just checked and tickets are still available here if you want to join us in person.
Posted by Tom Miller - Getting Deeper with Tom at 7:32 AM No comments:

At the age of 8, Ali Ehsani was terrorized as Islamic extremists murdered his mother and father in Afghanistan.  His family was one of thousands of families that practiced Christianity in that country, and his parents were sought out and killed for their belief.  Ehsani spent the next 5 years fleeing the country and making his way to Rome.  Since that time, he has dedicated much of his life to helping Christians in Afghanistan.  Ehsani befriended another Afghan Christrian living in Rome who had escaped as well.  His friend's family is still in Afghanistan, and the friend's father has recently been arrested and separated from the rest of the family.  Ehsani has been reaching out to Pope Francis in an attempt to gather any available resources to assist this family and others who are trapped under the Taliban regime.  Pope Francis made this appeal just hours before the Taliban takeover of Kabul, “I join in the unanimous concern for the situation in Afghanistan. I ask all of you to pray with me to the God of peace, so that the clamor of weapons might cease and solutions can be found at the table of dialogue”.  I join him in praying.  For the complete story as reported in the Washington Post, click here.

Posted by Tom Miller - Getting Deeper with Tom at 6:17 AM No comments:

Just A Farm Boy From Idaho Neal grew up on a farm in Idaho.  At eleven years old, he declared he was going to make a million dollars raising cows to support his family's missionary efforts.  He aborted that plan when he found out his success would be dependent on very low mortality rates and a very high percentage of heifer twin births.   His tribulations raising cows helped to teach him some great life skills:

1. getting to the heart of what's needed for a project, and what isn't.
2. designing, implementing and launching a prototype to market quickly
3. connecting technical direction with the real goals of a business
4. getting a whole team's work accomplished with only me on the job
5. working on or leading a team

These life skills have paid off for him.  Neal Harmon is the founder of Angel Studios which has produced the highly regarded TV Series, The Chosen.  The Chosen takes stories from the Bible and brings them to life.   The Chosen is different from other TV Series in that it was crowdfunded.  Angel investors and the public pay it forward so that the studio can produce content that is not controlled like it is in traditional production companies.  It inspires me to see men and women use what they have and what they know to help build God's kingdom here on Earth.

Posted by Tom Miller - Getting Deeper with Tom at 7:47 AM No comments:

Our ConnectGroup from church is getting ready to kick our fall semester.  In our last session, we read and discussed J. I. Packer's Knowing God.   In doing some research for one of our lessons, I found this video of Packer introducing a book by Mark Jones called Knowing Christ.  Jones is a Presbyterian minister in Canada and is a lover of the Puritans.   His doctoral dissertation was on Thomas Goodwin, a Puritan who lived from 1600 to 1680.  After reading several reviews of Knowing Christ, we decided to read and discuss that book this season.  Topics from this book will probably be popping up in this blog, so if you would like to read along, we would love to have you.  If you live in the Braselton, GA area, we would love to have you join us in person.
Posted by Tom Miller - Getting Deeper with Tom at 4:18 AM No comments: