I believe we all lost a lot of emotional energy this week following the tragedy of the bombing in Boston.  I wish I had some new revelation that would help me understand how a child of God could be so sick as to want to do something like this.  I wish I understood what I could do to explain how someone could do this.  I wish I knew what I could do that would comfort or acknowledge the loss of those families that were affected.  I have never had anything like this happen to someone that I know personally.  The closest thing that I can relate to is the death of my dad to cancer, and he had lived a long and happy life before his death.  I can only hope that a love like the love that I felt during the death of my dad was available to every person that was affected by the bombing.  That love came from my Savior, Jesus, and from my friends and family that know him, too.
Posted by Tom Miller - Getting Deeper with Tom at 1:12 PM No comments:

What's in a name?

This week, Caroline and I had the pleasure of meeting with our good friends, Stephen and Christina Byerly.  Stephen has been working with the Wesley Foundation at UGA for the past several years and has recently accepted a position with Café 1040.  Café 1040 isn’t the latest hip coffee joint.  1040 refers to the window of the world between 10 degrees and 40 degrees north latitude.  That region contains the largest proportion of people that have never heard the good news that Jesus brought to the earth 2000 years ago.  Café 1040’s mission is to change that by equipping young people for full time work in that region.   (I still don’t know where the “Café” came from, but it DOES sound pretty hip.)  Caroline and I are currently going through a 4 month study on missions at our church, and while we have not felt the call to go overseas yet, it gives us great pleasure to support our good friends who have.  Click here for more on Café 1040 or feel free to contact me directly.
Posted by Tom Miller - Getting Deeper with Tom at 4:06 AM No comments:

Nothing Really HAS To Be Done 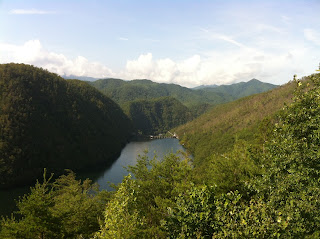 Caroline and I spent the weekend with our good friends, Greg and Mary, at their cabin in North Carolina.  Getting ready to leave town for some time off is always interesting to me.  I look at my to-do list and when you get down to the day before you leave, each item begs this question “is this something that HAS to happen before I leave or can it wait till I return?”  The lesson I learned is that nothing really HAS to be done, it’s more about what I like to do or what I want to do.  Then when I get on the road, I take a deep breath and try to rest in the fact that everything else can wait.  It is very hard for me, because I love my work and I love for my clients to be happy.  But the  truth of the matter is, it can wait.  We had an amazing weekend.  I felt refreshed by the mountains, the weather, the food and my friends.  I hope that it allows me to be better for my family, friends and clients when I return.  (I have to confess that I was delighted that the accommodations included cell and internet service.  I wasn’t able to completely disconnect while I was there.  Oh well, maybe next time.)
Posted by Tom Miller - Getting Deeper with Tom at 6:02 PM No comments:

I had never heard or Cesar Chevez before this week.  Apparently, Mr. Chevez died in 1993, but before he died, he was the most prominent activist supporting the rights of migratory farm workers from Latin America.  As I read his biography, it sounds like he did some amazing things.  Cesar’s birthday happened to fall on Easter this year, and Google decided to feature him in their home page logo that day.  In my research, I was also interested to learn that Mr. Chevez was raised Roman Catholic, and he probably recognized and celebrated that something else very important happened on Easter.  Maybe next Easter, Google will incorporate a cross into their logo, or at least an Easter Bunny.
Posted by Tom Miller - Getting Deeper with Tom at 5:33 AM No comments: