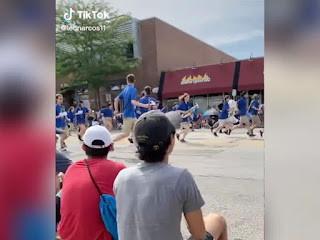 We were all sickened by the massacre in Highland Park,  IL at a July 4th parade killing 7 people.   One two year old toddler arrived at the parade with two parents and left with none.  They were both killed.   I watched this interview of a mom who was also at the parade with her husband and 2 year old son.  They escaped physically unharmed, but mentally changed for life.  Her plea is impassioned but controlled, calling for us all to do something.  I have struggled with what to do.  I have friends that are gun advocates, but it is more than obvious that assault weapons in the wrong hands lead to innocent people being killed senselessly. As the mom in the video was laying her 2 year old down for his nap on the afternoon of the 4th, he looked up at her and said "no more running".   I can't imagine how I would feel if this were one of my grandchildren.

Posted by Tom Miller - Getting Deeper with Tom at 6:29 AM